Shakespeare on the Saskatchewan 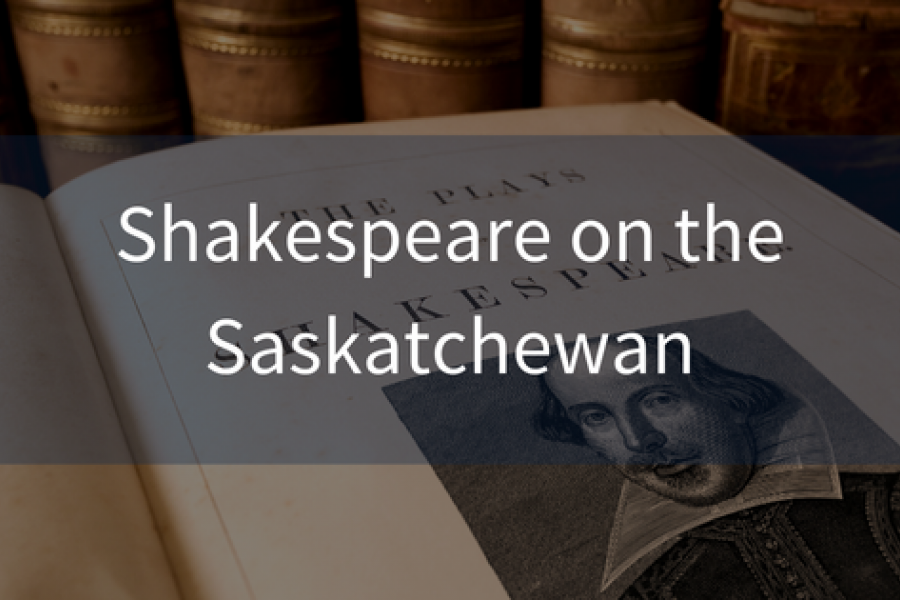 Every summer, Shakespeare on the Saskatchewan makes its return on the banks of the South Saskatchewan River. Running throughout July and August, the festival hosts nightly, full-length plays from Tuesday to Sunday all summer long!

Starting in 1985, Shakespeare on the Saskatchewan sought to make the work of Shakespeare an enriching and accessible experience for everyone, all while supporting and celebrating the talents and abilities of local artists.

It is a festival that occurs every year that produces not only plays performed by professional and talented actors, but a whole host of other exciting activities. At Shakespeare on the Saskatchewan, you can experience everything from medieval feasts and Sunday teas to workshops, lectures and art displays at galleries and museums.

There is truly something for everyone here!

From the years of 1985 to 2019, the amazing team at Shakespeare on the Saskatchewan was known for transforming a barren riverbank perch into an exciting cultural hub every summer. However, in winter 2020, their team completed a project called Staging the Future.

Staging the Future was a redevelopment project that built a permanent amphitheatre base, dressing rooms, a contemplation circle, a box office, a courtyard, and even a bar with a beautiful riverside deck! This means that the amazing Shakespeare on the Saskatchewan site is accessible to the public year-round!

Every spring, a fabric tent is installed over the new amphitheatre base, which marks the start of the preparations for this busy and highly anticipated summer festival. To host other exciting events, the Shakespeare on the Saskatchewan team set up several other smaller tents around the area.

One of the most popular venues at the festival is the Community Stage. This is the only free summer-long entertainment venue in Saskatoon, providing a lineup of performances from local artists and community groups. This stage is an absolute must-see for anyone who wants to get to know the talented community of artists that exists right here in Saskatoon!

But how did this all start? With its long and impressive history of innovation and bringing the arts to the people of Saskatoon, the Shakespeare on the Saskatchewan team is known for its incredibly hard work and dynamic programming on the banks of the river.

The reason that this festival has been able to maintain its long-held success and popularity is the people behind it! In the beginning, founder Gordon Mccall brought together a group of talented theatre artists for their very first production in 1985: A Midsummer Night’s Dream.

Once local theatre legend Henry Woolf took over leadership of the festival as Artistic Director, the festival began to reach new heights. As a gifted director and actor, Henry introduced the Festival Frolics as one of the major festival events. This offering included musical theatre and helped the festival attract a wider audience in Saskatoon.

Bringing in a musical theatre element to Shakespeare on the Saskatchewan took the festive atmosphere to a new level. Even after completing his tenure as artistic director, Henry continued to be involved with the festival, dedicating endless amounts of time and energy to the artistic vision that he started. Since 2014, the artistic producer role has been held by Will Brooks.

As for the future of Shakespeare on the Saskatchewan, the festival maintains a deep commitment to continuing the legacy of innovation, artistic integrity and cutting-edge ideas started by Gordan Mccall.

So, in 2015, the Staging the Future Capital Campaign was launched to make the Shakespeare on the Saskatchewan venue a permanent landmark for the art lovers and thespians of Saskatoon.

Now, in 2022, with construction complete and the threat of the pandemic greatly minimized, locals will be able to experience the magic and the excitement of Shakespeare on the Saskatchewan once again in a way that they never have before!

Next up is Cymbeline. This play takes Shakespearean elements that you may be familiar with from earlier plays such as themes of star-crossed lovers, or mistaken identities, and weaves them together into something new and unique. This makes the play an absolute must-see for any fan of theatre.

From July 24 - August 14, come and see the Community Events Area transformed into a beautiful and elegant tea house where visitors can enjoy tea, finger sandwiches, pastries, musical entertainment, and more.

Bringing joy to local viewers and entertainers alike, Shakespeare on the Saskatchewan is a valuable and exciting festival that enriches the local scene in Saskatoon every summer. With their dedicated team of professionals and innovative artistic ideas, combined with a love and passion for the local community, the festival is worth going to for anyone in Saskatoon who’s looking to add a little bit of theatrics to their summer.

Leenan Property Management is a community-centred property management company serving Saskatoon and Regina. Our team is committed to helping real estate investors and landlords manage their rental properties. Reach out to us today for more information on our comprehensive property management services!